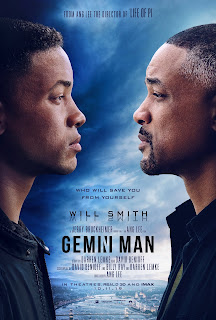 Ang Lee should really stop doing action movies. Every time he ventures into an action movie, it usually is shit. Hulk, nuff said. Just stick to movies, you are good at.

For an action movie, the action sequences were boring and ridiculous at times. The CGI was below par as well which makes the action sequences a little silly. I've always enjoyed watching Will Smith's movies. He always had a pretty good mix. An aging Will Smith doing action is not too bad. Though he ain't no Tom Cruise but still fun to watch. However, adding a younger version of Will Smith that looks like the Fresh Prince of Bel Air with weird lips (Think Henry Cavhil in Justice League) is just a plain no.
I love sci fi movies but sometimes you have to be a little, just a little realistic. Don't push it too far or it will just become ridiculous. Gemini Man is a fine example. The movie was going ok right until mid way it starts getting ridiculous and then towards the end, the plot twist was just rubbish. And then there was Clive Owen. I really did not understand what Ang Lee was trying to do with his character? Cos it was confusing and Clive Owen's acting did not help one bit as well.

Don't bother watching Gemini Man at the cinema. It's boring and a waster of ticket money. Wait for it to show on cable or Netflix.
Posted by Subash Ramone at 10:45:00 am No comments: 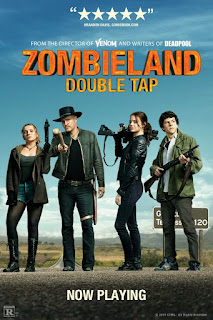 I enjoyed the first one and I was pleasantly surprised they decided to do a sequel ten years later. Double Tap was still fun and had some pretty funny lines and scenes.

The cast is still the same and they added a few more to the mix. Zoey Deutch is one of the new addition and she pretty much steals the show every time she appears. It was pretty obvious that the rest of the cast could barely keep themselves from laughing. Abigail Breslin( Little Rock) used to be cute in the first movie. She did not age well. She looks very different now. Beside Zoey stealing the show, Woody Harrelson still maintains his comedic scenes to a tee. It was like Tallahassee hasn't changed one single bit. The cameoswhich have appeared for Double Tap had their moments as well. However I wished Columbus had "murrayed" another celebrity instead and it would have been hilarious if it was Dan Akroyd.
Do wait a while for the end credits where you will see a pretty funny clip.

Zombieland: Double Tap is a fun movie to watch. If you like zombie movies or have watched the first one then you will enjoy Double Tap. I enjoyed the names they came up with for the zombies as well. Hilarious.
Posted by Subash Ramone at 9:52:00 am No comments: