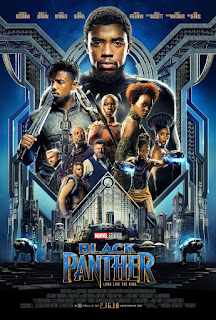 I'm not a big fan of Black Panther comics and I haven't really read much of his stuff so I wouldn't really know how much the movie has deviated from the comic. So I'm writing my review just as a movie fan's perspective.
I enjoyed Black Panther as a visual treat. It's very obvious there has been a lot of effort and work done. The designs for the city, Wakanda reminds me of futuristic city that is not bleak but happy. I really liked the intricate costume designs for all the tribes. They were made in such a way that you can tell each tribe have their own costumes and colours and they looked beautiful. My personal favs are the tribe with the dude who has a huge coaster like thing on his lower lip and the Jabari Lady warriors.Those ladies are fierce as fuck.
Casting for Black Panther was pretty good as well. The ones that stole the scenes for me were Michael B Jordan as Kilmonger and Danai Gurrira as Okoye. Danai was my fav character, Michone in the TV series, Walking Dead. The reason I say "was" is cos the fucking series which used to be great is boring as fuck now and should be called Sleeping Dead instead. Anyway, Danai's fight choreography was great to watch as well. I remember watching Michael B Jordan as a kid in my fav TV series called The Wire. He has definitely grown up to be a fine actor and I look forward to watching many more of his movies. His only shit movie was the disastrous Fantastic Four remake which was painful to watch. Jordan plays a rather different type of villain in this movie. A bad guy whom the audience can understand and probably relate to due to shit going on in America.
Direction for this movie was pretty good as well. I got to give it to Ryan Coogler. He did an indie flick called Fruitvale Station which was a really good movie. Then he went on to do Creed which I found it to be great as well. Both movies feature Michael B Jordan as well. I will definitely keep an eye out for his future works.

All in all , Black Panther is a fun movie to watch which has a decent story line and script which does make you kind of reflect.Especially that last line of Killmonger. Thought provoking and quote worthy as well. I really liked that line.

PS- There are 2 end credit scenes which aren't really important. You can skip it and find out online later on instead of waiting.